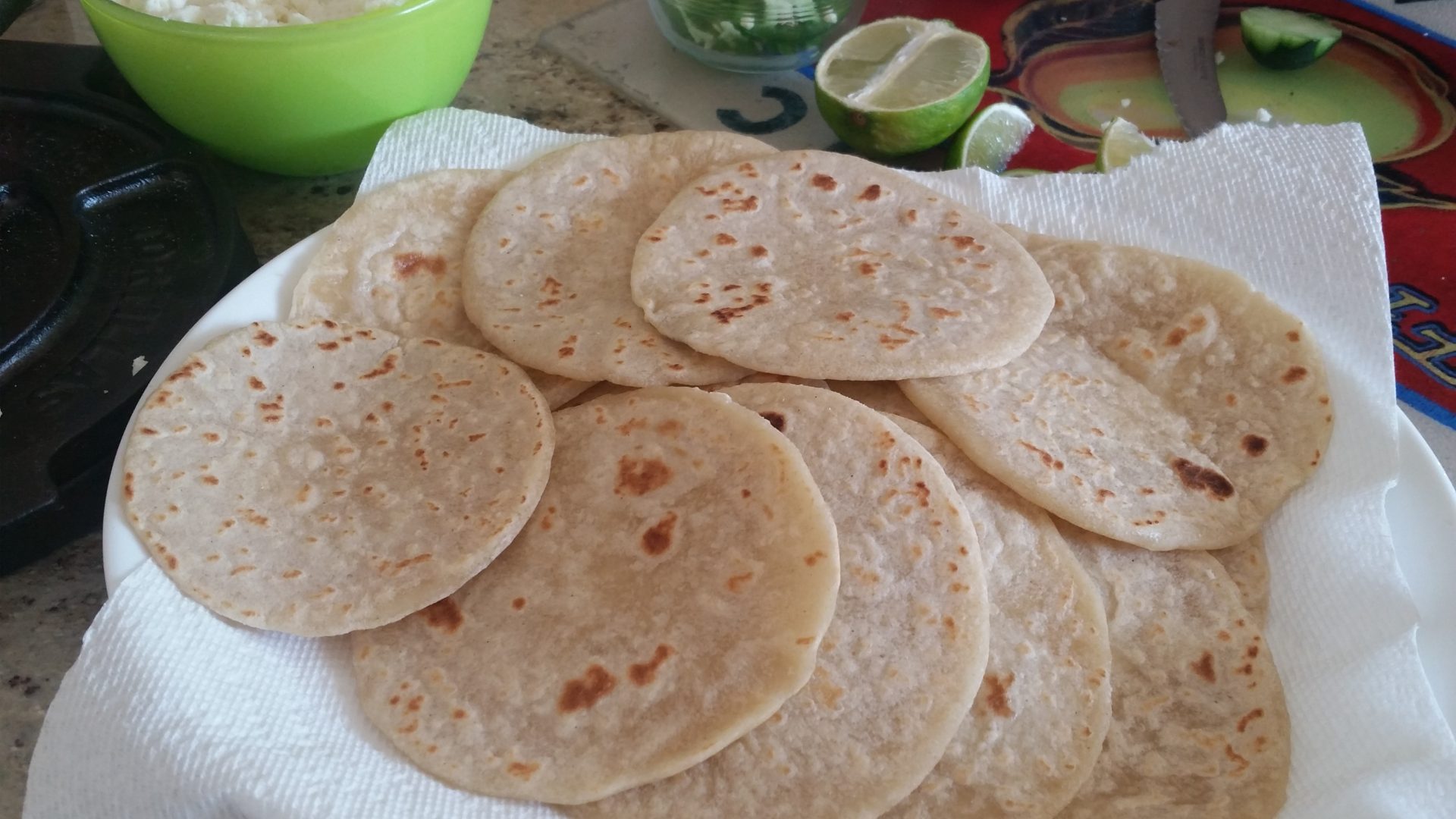 Once you have homemade tortillas, the store-bought ones just don’t cut it anymore. I’ve been making corn tortillas every Tuesday for almost a year now so you can imagine my disappoint when, earlier this summer, Meijer stopped stocking masa harina, without which you can’t make corn tortillas.

Last week, with my masa running low, I experimented with flour tortillas. They turned out pretty decent, but the dough is a lot firmer and springier than corn flour, and they didn’t take play so nicely with my tortilla press. The end result was more flatbread than tortilla, which actually worked out well because I made Mediterranean-inspired tacos with chicken shish tawook, beets and feta cheese.

Fast-forward to today, and my masa harina situation hasn’t resolved itself. There was a little bit left, so I figured I could make a batch of half & half tortillas: part masa corn flour, and part wheat. I found a recipe that seemed easy enough and halved it because we didn’t need 30 tortillas. I’d also substitute butter for shortening.

Everything was going swimmingly until it was time to knead the dough. It was really sticky. Usually the problem is “dough is too dry”, which is remedied by adding a tablespoon or two of water, so I figured the reverse should also be true, and I dusted some more flour on it. And some more. And some more. And I tapped out the rest of the masa. Still too wet and sticky, this was not going to work. Then it dawned on me: I had used the called-for 2 cups of hot water, instead of 1.

I incrementally added flour and continued to mix the dough until it reached what I figured was the correct consistency. They turned out great, possibly the best tortillas I’ve made, ever. Here’s the recipe as intended, plus my approximate deviations:

50/50 Flour/Corn Tortillas, Give or Take

So, they were more like 65/35 flour-to-corn. But they were amazing and they looked great, too, which is important because presentation matters. Sure, it’s just family taco night, but I worked a few restaurant jobs in college and I still take pride in plating a meal that looks as good as it’s going to taste.

When you’re ready to cook them, fire up your range to medium heat. I used a non-stick flattop griddle for convenience, but cast iron would probably be my first choice in a perfect world.

Once the cooking surface is hot, it’s time to flatten them. I used a tortilla press and parchment paper (which keeps the dough from sticking to the press). A rolling pin would probably also work, but if you’re serious about tortillas, a press is more efficient and consistent.

They cook pretty quickly, a minute or so per side and then maybe another 30 seconds to even it out as needed. My daughter helps press them so that I can man the griddle and usually have 6 or 7 of them going at a time in various stages of completion.

Load those bad boys up with your favorite taco stuff, garnish to taste. This week, it was chile-lime chicken in the slow-cooker, topped with fresh sweet corn, diced tomatoes, jalapenos, sour cream and queso fresco.

Taco Tuesday is observed at my house with a near-religious zeal, so you can expect more taco-related articles and recipes in the future. If you can’t wait that long, I’ve got an album full of my taco creations and inspirations on Facebook.